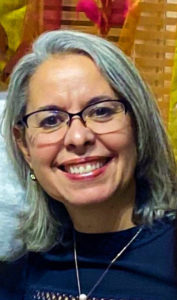 Dr. Maeva López-Kassem is a bilingual education coach for the Division of Multilingual Education in the Buffalo Public School (BPS) District. She has worked for the district since 2012 in the roles of Pre-K Dual Language teacher and bilingual education teacher. In years prior, Maeva worked in the Bilingual Education Program at the University at Buffalo (UB) and the Antilles Consolidated School System (DoD) in Puerto Rico. Throughout her educational career in teaching emergent bilinguals (EBs), Maeva has embraced child-centered, constructivist practices that celebrate her students’ languages and cultures. She first learned about translanguaging through a professional learning opportunity offered by Dr. Kate Mahoney from SUNY Fredonia in her role as a CUNY-NYSIEB Associate Investigator, and has since become a fierce advocate for translanguaging. Maeva is a graduate of the Universidad Interamericana de Puerto Rico, where she completed her doctoral studies in Administration and Supervision of Special Programs. She received an MS in Bilingual Special Education from Hunter College, CUNY, and a BS in Elementary and Special Education from SUNY College at Buffalo

Take a Peek into Maeva’s Classroom

This video was inspired by the meaningful languaging happening inside and outside a classroom of 4-year-olds, under Maeva’s direction at the Bilingual Center #33 in South Buffalo, NY. The work was done in collaboration with Dr. Kate Mahoney an associate professor and TESOL Program Coordinator at SUNY Fredonia. In the video they share the experiences of these young emergent bilinguals through a translanguaging lens. The essential elements of Maeva’s work with her students include parent involvement, child as center, and a focus on languaging around art and nature. This work could not have been done without the support of the children, their families, the direction of Principal Miguel Medina.

Dr. Kate Mahoney is an associate professor and TESOL Program Coordinator at SUNY Fredonia. She was awarded degrees from SUNY Geneseo, New Mexico State (NMSU) and Arizona State (ASU). Mahoney’s research addresses the validity of using achievement and language-proficiency test scores for Emergent Bilinguals (EBs), language-program effectiveness through meta-analysis, large-scale analyses, and the evaluation of policies and practices concerning EBs in Arizona and the United States. Dr. Mahoney has published research findings in the International Journal of Language Studies, International Journal of Testing, Journal of Educational Research and Policy Studies, Bilingual Research Journal, Educational Policy, and Teachers College Press, among others. She has taught in New York, Texas, New Mexico, Arizona and Belize. Mahoney was awarded a Title VII Bilingual Education Fellowship (1999-2003), an AERA Dissertation Award (2003), and the William T. Hagan Young Scholar Award (2011). She published her first book, The Assessment of Emergent Bilinguals, with Multilingual Matters in 2017 and is currently beginning work on the second edition. She was inspired by the translanguaging pedagogy used by Dr. Maeva López-Kassem in her pre-K bilingual classroom when Bilingual Center #33 participated in the CUNY-NYSIEB project.

Overview of the Collaboration

Dr. Kate Mahoney and Dr. Maeva López-Kassem met in 2012 when Mahoney became the School Improvement grant (SIG) writer for Bilingual Center #33 in South Buffalo, New York and López-Kassem was a bilingual teacher. They were first introduced by Mr. Miguel Medina, principal of Bilingual Center #33 who was later awarded (in 2017) Bilingual Administrator of the year in New York State. In 2013, under the leadership of Mr. Miguel Medina, the SIG introduced more child-centered learning through a Reggio Emilia philosophy and project-based learning. In addition, higher-quality sheltered instruction and the launch of a new dual-language bilingual education (DLBE) program was introduced through the SIG. The DLBE program gradually replaced the transitional program that had existed at the Bilingual Center since the 1980s. During the third year of the SIG (2015), Mr. Medina applied and the Bilingual Center was accepted to be a participant-school in the CUNY NYSIEB project. The SIG and CUNY NYSIEB shared overlapping goals, especially the focus on language as an asset and valuable resource.

Mahoney (Associate Investigator CUNY NYSIEB) and López-Kassem (pre-K Bilingual teacher) furthered their work together with a school-based team called the Emergent Bilingual Leadership Team. This team was composed of Bilingual and ENL teachers, principal Medina, and administrator-in-training and Multicultural Committee Chair, Ms. Janet Correa-Longo. The focus of the school-level participation was on leveraging multiple languages as resources and increasing multilingual ecology. Dr. López-Kassem’s 4-year old pre-Kindergarten classroom was a happy, engaging environment where language was learned through authentic and culturally relevant experiences. López-Kassem was the director of these learning experiences where culture and language were not taught as a static topic, but rather culture and language provided the context for meaningful exchanges through two plus 100 languages (Regio Emilia philosophy plus bilingual education and translanguaging). López-Kassem was a Master at translanguaging with her group of 4-year-olds to provide meaningful experiences and value.

Mahoney and López-Kassem conducted research on translanguaging and storytelling, and often video-recorded the children in action. Mahoney’s favorite memory in López-Kassem’s class was in the socio-dramatic center called “the kitchen.” Mahoney pretended to have a fever and a very concerned Adriana (4-years old) cooked her chicken soup while telling stories about her grandmother and the soup her grandmother makes when she is sick. Adriana’s friend took Mahoney’s temperature while she was cooking soup and talking about her grandmother. After Mahoney “ate the soup” and received “a shot” from the concerned friend, Adriana and her friend nursed Mahoney back to health. Experiences like these happened all the time in López-Kassem’s classroom and provided an environment for the rich and meaningful translanguaged experiences. Documenting these experiences led to the idea of this video.